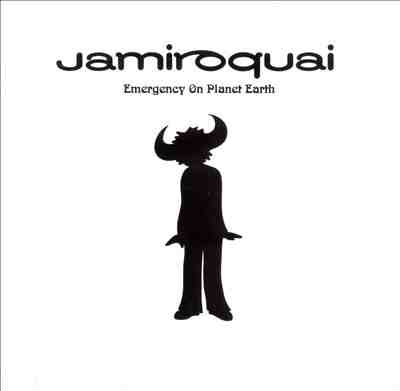 About a month ago, I hit up my favorite thrift shop and managed to purchase not one, but two Jamiroquai CDs, their first album, Emergency on Planet Earth, and their second album, Return of the Space Cowboy, for the low price of $2 per CD. I couldn’t wait to start listening. Of the two albums, Emergency was the one I gravitated to immediately. I was familiar with the album’s pro-environmental stance, and I had glimpsed at the music video for the title track, which was a montage of environmental clips, from oil spills to endangered animals. Preachy, yet catchy.

Songs like “When You Gonna Learn (Digeridoo)”, “Too Young To Die”, and the title track, “Emergency on Planet Earth”, are the prime examples of the album’s preachy side. Even as heavy handed as the messages are, the groove of the music makes it impossible to stop listening. The band borrows influence from everyone from Earth, Wind, & Fire to The Brand New Heavies.

If you feel the need to skip the Captain Planet-caliber environmental and anti-destruction messages, you can always check out tracks such as “Hooked Up”, which offers the track’s music as a sound opiate/anti-depressant, or “If I Like It, I Do It”, a catchy song about anti-conformity. The instrumental piece, “Music of the Mind”, is so peaceful, it can be used for meditation, which I suspect was the purpose of the composition. Getting back on the up-tempo groove, the James Brown-esqe “Whatever It Is, I Just Can’t Stop” is a first-person observation of the struggles of alcoholism and addiction. The music is so catchy, you’ll have to read the lyrics to pick up on the message. Amazingly, with so much funk on this album, there’s only one track that comes close to a love song, the smooth, “Blow Your Mind”, a cross between an Earth, Wind, & Fire ballad and a roller rink jam.

Overall, this debut album is a good place to get your feet wet if you want to check out Jamiroquai. Yes, it’s got “Message” written all over it, but I’d be a fool to ignore how good the music is.